Dont Know what CHhugs is then click the image above

Believe it or not but the end of September sees CHhugs start their main auctions in the run up to Christmas! As well as all the signed Beanies there will be other signed items, as well as our Snowflake Halos.
Also for this year 4 very special hand dressed beanies! Check out the Pantomime Princesses to see more!

Summer Bride 2004 raises a wonderful £98.69 from Tanya and Jean Carpenter, and will be joining the last two Summer Brides!

We also have the unveiling of the hand beaded item for September. She is called Dear Butterfly. September the 19th sees the start of Children's Hospice Week and their logo is a butterfly! You can see a photo of her here Dear Butterfly  She will be going to auction on 2nd September at eBay.co.uk

Time to get a close look at this years Summer Bride which will be going to auction at eBay at the end of the month. Visit the Summer Bride 2004 page to see her.

HOT NEWS! A huge Thank You goes out to 'Done and Dusted', the event organisers of the annual Popbeach concert, held in Great Yarmouth. Thanks to Talent Liaison Manager Anna Gunne, CHhugs managed to get all the acts that appeared on Sunday, to sign Beanies for us! To see who signed what, head for the Celebs Contacted page!

As summer approaches, we have one of our prettiest hand dressed beanies up for auction at eBay.co.uk. She is called May Queen and she needs to be seen to see just how lovely she is! Later this year we will be having our Summer Bride 2004, and she is bound to be a very popular item!

Watch out for this years Valentines Halo which goes to auction in time for you to win her for Valentines Day! She is titled Rose Pink Valentine's Halo has been created exclusively for CHhugs and is a one off design never to be repeated!

Click on the logo to check out the auction page.

The last batch of auctions for 2003 has finished and raised an incredible £988! Beanie Baby Items raised amounts from
£10.50 for Brigitte autographed by model Nell McAndrew, to an incredible £205 for the Amber the Cat and postcard
signed by Harry Potter creator J.K. Rowling! The Classy autographed by Formula One Racing driver
raced to a whopping £107. Top of the Non Beanie items was the signed Madonna Montage which was donated by CHhugs Buddy Margaret, and raised an excellent £180.
These great totals mean that next year CHhugs will be able to do a full round of donations - not just financial but those
ever loved Beanie baby Toys too! 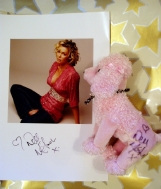 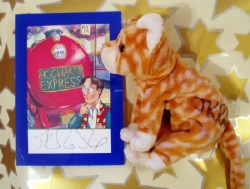 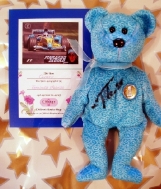 It is time for the Big One 2003! Yes this years big finale auctions. If you are a fan of Lord of the Rings, Harry Potter,
Star Trek, Buffy the Vampire Slayer, Eastenders, Formula One Racing, or music then we have something for all of you
with some very big names! Billy Boyd, J.K Rowling, George Takei, Emma Caulfield, Den and Spencer, Eddie Jordan,
Lionel Richie are just a few of the names on offer! A big Thank You goes out to Margaret, CHhugs Buddy who donated
a signed Madonna montage! Also a big thank you to CHhugs Buddy Kelly, who got several of these items signed in person.
Click Here      to go straight to the auctions now!

It was about time the site got an overhaul, so here it is, bit more organised, broken links fixed and general admin.
Now allowing an easier method of updating the site - watch this space for further developments.

The latest set of CHhugs signed items is currently running on eBay. For an up to date listing Click Here

It's a busy time all round - not just sending and receiving parcels of Beanies which have been signed by celebrities, but
donations too. Also the countdown has begun for the big run up to Christmas with around 150 items going to auction at eBay.

August 2003
This years Summer Bride dressed beanie is a huge success at auction raising an amazing £185 - a record breaking amount
for one of our dressed beanies.

June 2003
CHhugs hand decorated and dressed Beanies have always been popular and this months two flower Beanies called Sweet Pea and Sweet Pansy are no exception raising a fantastic bid of £98 for the pair.

April 2003
CHhugs gets a great surprise when a cheque for £432 arrives from Lloyds TSB in Newport, South Wales. They knew about CHhugs from CHhugs Buddy Sharon Angel, so when the bank had a Casual Dress Day they decided CHhugs would be the charity they collected for! 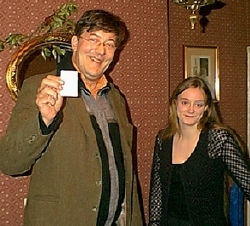 CHhugs was delighted when actor, writer, TV presenter and film producer Stephen Fry did the draw for the two Muhammad Ali autographed Beanies - Flitter and Buzzie - chosen for Muhammad's saying "Float Like a butterfly sting like a bee."
The draw was done on Boxing Day 26th December, whilst Stephen was on his way to the Norwich City Football Match! Seen here with CHhugs Buddy Stephanie
Moore, he drew the two winning tickets. The two winners were Natalie Turner from Slough and Mrs McNamee from Jersey. Both were delighted to know they had won.
The Grand Draw made a fantastic total of £579 - A great way to start this years fund raising

The latest set of CHhugs auctions have now been running for a week - and the bids are a little disapointing - so come on, show your support and bid. Click Here to view latest prices

We have a load of new photos to upload over the next couple of weeks with loads of personalities who have signed up. Some examples are :-